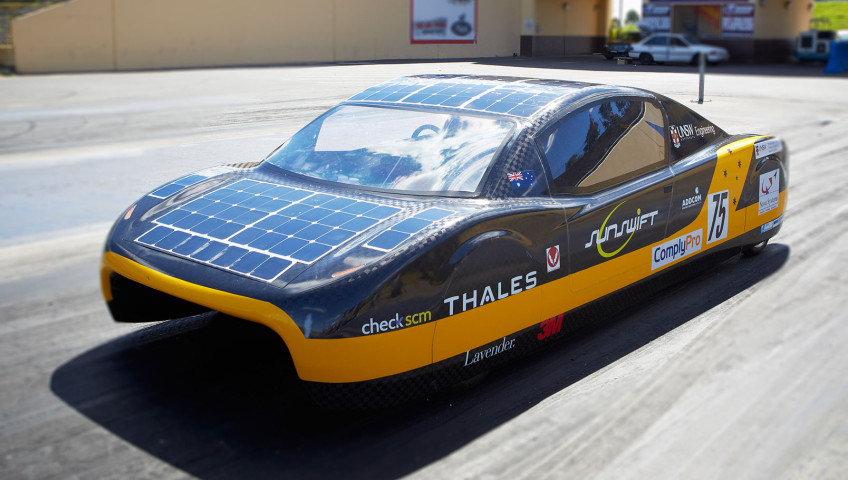 While you won’t find them on the streets or the freeways of today, solar cars have existed for roughly 20 years or so. Although the technology surrounding solar power has advanced dramatically whereas homes and commercial structures are concerned the technology is still somewhat impractical for regular vehicular travel. That’s not to say that solar powered cars aren’t functional but the amount of power that must be generated in order to meet the power needs of today’s cars is difficult to generate on such a small body and in order to utilize many photovoltaic cells as possible, makers of solar cars often build vehicles that are only capable of carrying one or two persons.

Although they aren’t commonplace on today’s streets and highways the solar power cars of tomorrow will feature an increased amount of solar technology. At some point in the not-too-distant future cars will operate entirely on solar energy and will be more than capable of generating power needed to not only run a car’s engine but address internal power needs such as air-conditioning, movie and audio playback, among other things.

Modern solar vehicles, although not extremely powerful, run efficiently when the sun shines brightly though they tend to run into problems on cloudy days and during the night. Recently scientists working with solar technologies and those who build solar vehicles have been experimenting with battery backups similar to the ones used in houses and places of business. These batteries essentially store gathered sunshine and convert it into electricity only when needed. These batteries are composed mainly of nickel-metal hybrids though they sometimes are made from lithium-ion and lithium polymers. Solar powered cars require these special types of batteries because the lead acid batteries found in more traditional cars are far too heavy.

Modern solar powered vehicles are all about efficiency and to reduce the amount of power needed to operate these vehicles the majority of solar powered cars currently only utilize three wheels. Three wheeled solar powered cars typically operate in the range of 80 to 170 volts. In addition to utilizing specialized batteries and just three wheels solar powered cars are designed to collect power when they are not in use. This collection never ceases and helps these breakthrough vehicles gather enough power for their next trip. With efficiency being the goal and power consumption a big concern, don’t expect to find things like iPods, DVD or Blu-Ray players, or any other modern amenities in solar powered cars. Until technology advances to point where power can be gathered and converted at a higher rate these things will be relegated only to more traditional vehicles.

Check out the video below brought to you by Sunswift
Although solar powered cars are not practical for everyday use there are several types of vehicles that utilize photovoltaic panels rather well and do their job efficiently. One such example is golf carts. Many modern golf carts utilize solar panels to carry golfers from one hole to the next. While golfers are busy playing the game these golf carts are continuously collecting and converting sunlight to energy for their next trip. Solar panels work well on golf carts because they’re not driving for long distances and the long periods of rest they in between holes gives them time to charge up.

So when exactly will solar power be of practical use for everyday vehicles? That question is a difficult one to answer though we can confidently say that over the next decade or two solar power technologies will change so much and advance so rapidly that it’s hard not to imagine people driving solar powered cars to work, to school, and to the grocery store. How exactly solar power will be utilized in cars of the future is impossible to predict though the technology and its usage will become far more efficient than it is today.